The episode begins with Oswald Cobblepot showing up at Jim and Barbara’s apartment out of the blue. Jim is shocked to see Cobblepot back in Gotham and standing in his doorway. Cobblepot explains to Barbara that he’s an “old friend” of Jim’s. Jim quickly escorts Cobblebot outside and threatens him that by being back in Gotham he jeopardizes both of their lives. If Falcone discourse that Cobblepot is alive, both will be killed. Cobblepot warns of the war coming (as he has in previous episodes) and that Jim will need his help. Cobblepot brings up the fact that there could be a political war about the upcoming Arkham district vote and disappears into the night. 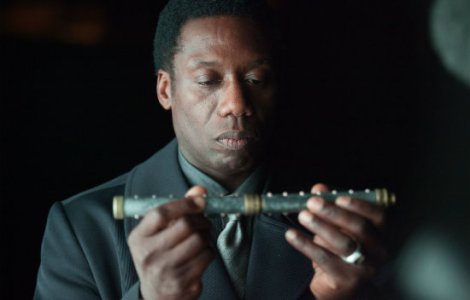 Meanwhile a councilman and his aide are stabbed and killed in a parking lot by a man with a metal spike. Between interviewing possible suspects and looking through evidence, Jim discovers the Arkham district Proposal. Jim visits Alfred to find out a little more about the Arkham plan. He discovers that the Wayne’s had development plans to purchase the large city block and create a new home for mentally disturbed individuals inhabiting the city. With the Waynes gone however, the battle for the land comes down between Don Moroni and Carmine Falcone.

Another councilman is abducted (who just so happens to be one of “Maroni’s guys”) and taken to Arkham asylum and is burned alive in a barrel. Jim knows that these killings are over the Arkham vote. Maroni struck first, and Falcone retaliated. Harvey and Jim learn more information about the man with the steel spike. They learn that his name is Richard Gladwell, a hit man known by Gotham’s underworld.

We see that young Bruce continues to be haunted by the killing of his parents. He has nightmares about the man who pulled the trigger on his parents. We see Bruce doing a little sleuthing of his own, as he studies files about the arkham plan to look for a possible connection between the council murders and the murder of his parents.

Maroni’s hideout is robbed by 3 men in masks. Cobblepot manages to hide some of Maroni’s cash away which goes noticed by Maroni. Maroni knows that it was Falcone that killed his councilman and robbed and killed his goons. He promotes Cobblepot to restaurant manager for hiding away his cash and….also because the position was open as the previous manager was killed. Cobblepot is given money for a suit and smiles at the fact that he is moving up the ladder in Maroni’s organization. Cobblepot’s motivation is power, and in his eyes he is slowly making progress by earning Maroni’s trust.

Barbara confronts Jim about Cobblepot asking who he is. Jim deduces that Montoya paid Barbara a visit. He asks why Montoya keeps coming to her. Baraba reveals to Jim that they used to be in a relationship. Jim is angered at the fact that Barbara lied to him. She later apologizes and doesn’t want any more secrets between them. She asks Jim again who Oswald Cobblepot? Jim refuses to tell Barbara anything about him saying that “it’s work”. Barbara gives him the ultimatum of letting her in to his life or letting her go. (At this point Jim you might as well let her go as this is the weakest storyline in the Gotham series.) 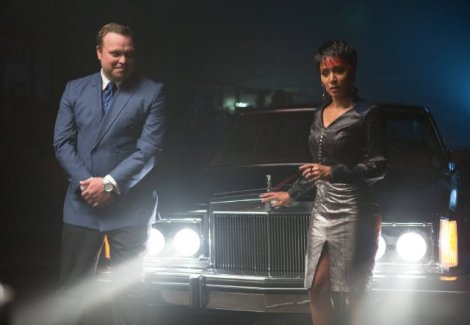 Throughout the episode, Fish Mooney is seen holding “try outs” for woman- showcasing their singing/entertainments skills….as well s their seduction skills. She tries out a girl named Liza, who quickly impresses her with her attitude and seduction skills. Two girls end up making the cut, Liza and another girl. Fish tells the two girls she auditioned to fight for the position. Liza makes easy work of the other girl which impresses Fish. This whole fight scene is reminiscent of the Joker’s “tryouts” scene in “The Dark Knight”. It’s clear that Fish has something up her sleeve with Liza. She will be used as a “weapon” according to Fish. I’m assuming she will be used against Falcone and possibly Maroni. It will be interesting to see what happens with Liza and just what Fish has up her sleeves.

Jim eventually discovers Gladwell’s movements and that his next target is Mayor James. Jim rushes to the mayors home to warn him but Gladwell shows up at the front door with his little spike device. Jim and Gladwell fight but jim is overwhelmed. Harvey shows up and helps save his partners life.

We soon discover that three men who robbed Maroni earlier in the episode are hired by none other than Cobblepot. He congratulates them on a job well done and feeds them each a cannoli – which happens to be poisoned and kills all three men. Cobblepot has successfully robbed Maroni as he takes the money for himself.

After all the murders, the Arkham site ends up being divided between Falcone and Moroni. The majority belongs to Maroini and his men as Mayor James confirms the imminent destruction of Arkham Asylum and the construction of low project housing and a waste disposal site along with a new mental facility.

Bruce watches on knowing that this “new” plan is not good for gotham. He tells jim that everything his family has worked for is falling in the hands of criminals. Bruce asks if Gotham can be saved in which jim tells him it’s worth trying.

Overall it was a good episode. It’s just the tip of the iceberg in the conflict between Faclone and Maroni, it’s just the beginning. Both mob bosses clearly took the front seat in this episode.  Morrone may have the upper hand for now, but we will see what Falcone, Fish Mooney and Cobblepot have in mind.

What did you think about this episode? Who will come out on top? Maroni or Falcone?